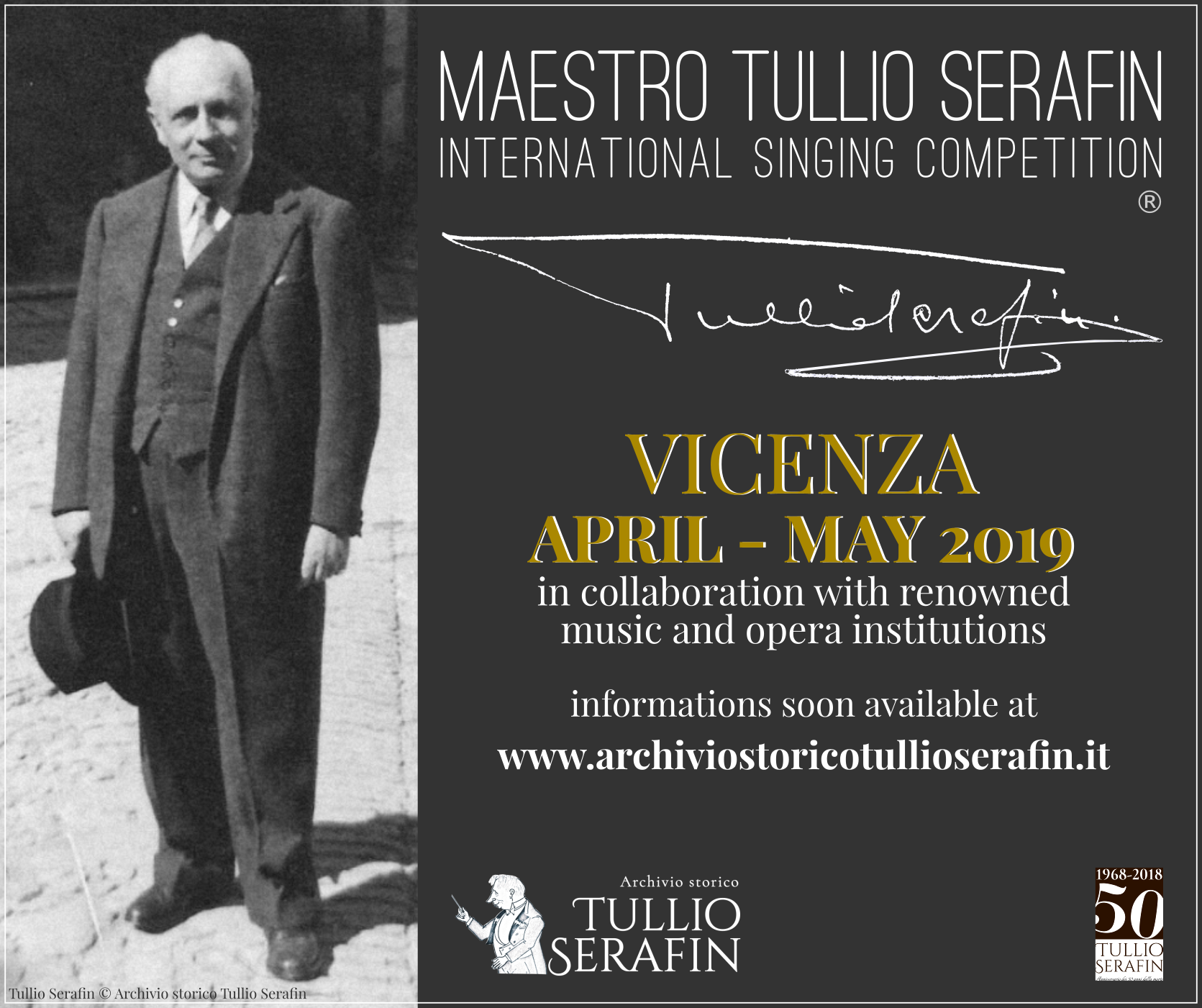 Established by Archivio Storico association that bears his name, it will involve important Italian and foreign musical institutions. The announcement is made while the celebrations continue for the 50th anniversary of the death of the conductor

The “Tullio Serafin Singing Competition” is born: in the spring of 2019 from Vicenza the start of an international prize for young promises

The “Maestro Tullio Serafin Singing Competition” is born. It will be held in Vicenza, between April and May 2019, and to launch it, in agreement with the family of the famous Venetian conductor, is the Archivio Storico Tullio Serafin association which preserves his memory and whic is the organizer of the Official Celebrations for the 50th anniversary of his death, awarded the Medal of the President of the Republic and currently underway with the involvement of many of the most important Italian and international theaters and festivals.

Designed for young talents of opera singing, the competition will bestow various awards, aimed at concretely launching the most talented artists in the international music scene, thanks to the involvement of established musical institutions. “An award dedicated to the memory of the Maestro – says Andrea Castello, president of the association – can only be addressed to young people, to whom Serafin always paid great attention, and must have an international profile, just as it was for his extraordinary artistic career. For this reason – continues Castello – the competition will start from Veneto, the native land of the Maestro, but will continue well beyond national borders ». The Historical Archive association Tullio Serafin was founded in 2017 by Federica and Jacopo Conte, great-grandchildren of the Maestro, by Andrea Castello and by Guido Faggion and Valentina Casarotto. The celebrations established by the association, based in Vicenza, boast the famous soprano Barbara Frittoli as ambassador. Beginning in February, they have involved until today, the Teatro Comunale di Ferrara, the Teatro Massimo of Palermo, the Teatro Regio of Parma, the Maggio Musicale Fiorentino, the Teatro dell’Opera di Roma, the Arena di Verona, the San Carlo of Naples, the Puccini Festival of Torre del Lago, La Fenice in Venice, the Teatro alla Scala in Milan and will continue with the participation of other leading music institutions in Italy and abroad, including the Metropolitan Opera theater in New York and the Lyric Opera of Chicago. Moreover, on September 13th, during the Vicenza in Lirica Festival, the first “Archivio Storico Tullio Serafin Award” was presented, assigned to the conductor Maurizio Arena. The calendar of the Celebrations is available on www.celebrazionitullioserafin.it.