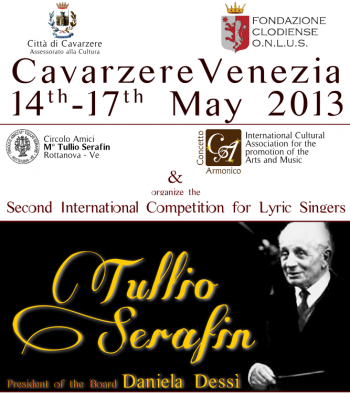 Download the PDF version of the Regulation and Enrollment Form.

Art. 1 The International Competition for Lyric Singers Tullio Serafin is open to singers of any nationality who at the date of 13th May 2013 are between 18 and 33 years old (soprano, tenor and countertenor) or between 18 and 35 years old (mezzo-soprano, contralto, baritone and bass) .

Art. 2 The Competition will take place in May 2013 (from 14th to 17th) at Teatro Comunale Tullio Serafin in Cavarzere Venezia and it will consist of three parts: a qualifying contest, a semi-final and the public final.

Art. 3 The enrollment form , filled in with all the requested information, must be sent to the secretariat of the Competition – “Concetto Armonico”, via Coette Alte, 11 – 30014 Rottanova di Cavarzere Venezia – before 10th May 2013 (the postmark date will be a proof). Enrolments can also be sent by e-mail to info@concettoarmonico.it .

The enrollment form must be accompanied by the following documents:

The fee must be paid by bank transfer to

Application forms lacking one of the mentioned documents will not be taken into account.

Art. 4 Enrollment closes on 10th May 213. Candidates will be informed by e-mail on 11th May about the time and date of the rehearsal with the pianist and of the qualifying performance. Applications after the closing date will not be accepted. The dates for the performance will not be changed for any reason.

Art. 5 Piano accompaniment will be decided by the direction of the competition. Candidates cannot ask for any change. Rehearsals with the pianist will begin on Monday 13th May at 2.00 pm. Candidates can be accompanied by their own pianist, at their own expenses, as eventually indicated in the enrollment form.

The Competition is divided in three parts:

First Qualifying contest (14th and 15th May, according to the roll-call decided by the competition direction, and with piano accompaniment as decided by the artistic direction). The contest will begin at 1.00 pm.
The candidate must perform the aria chosen for the Qualifying Contest as indicated in the enrollment form. At the end of the contest the Board will communicate the list of the candidates admitted to the semi-final and its choice of two arias (out of the five indicated in the enrollment form) which each candidate will have to perform. Candidates who will not be present at their scheduled time for the performance (see art. 4) will be excluded from the contest.

Third final contest.
The final will take place as a public concert on Friday evening, 8.30 pm, 17th November 2013 at Teatro Comunale Tullio Serafin with piano accompaniment. Candidates will perform an aria chosen by the Board and one of their own choice from the five indicated in the enrollment form except the one performed in the qualifying contest. At the end of the concert the Board will communicate the name of the winners. Candidates who are not among the winners will be considered ex-aequo. The decisions of the Board are incontestable.

The competition will be accompanied on the piano by M° Fausto Di Benedetto and M° Dario Tondelli.

Art. 7 Candidates will perform complete arias with recitativo and cabaletta, where present, in the original tongue and tonality.

Art. 8 President of the Board will be Sig.ra Daniela Dessì. The Board reserves itself the right to interrupt the performance of the candidates at any moment. If members of the Board are related to one of the candidates, these members will abstain from voting that candidate. After each contest the Board will communicate by public display the names of the candidates admitted to the following contest, or, after the final, the names of the winners. The board reserves the right to give ex-aequo prizes, or not to give the first prize in case no candidate is considered deserving. The first prize can not be divided and there will be only one winner. Second and third prizes will be divided in case of ex-aequo classification. The decisions of the Board are final and there will be no appeal against them. Enrollment to the competition implies acceptance of the conditions of this announcement.

Other awards can be decided during the final.

Art. 10 All performances in this competition can be recorded, reproduced, filmed, used in transmissions in Italy and abroad without any demands from the candidate to the competition.

Art. 11 Candidates have no right to any travel or accommodation reimbursement.

Art. 12 The organization of the competition is not to be held responsible for any kind of damage that could possibly happen to candidates during the competition.

Art. 13 Candidates can enroll using the attached form which must be completed in all its parts.

Art. 15 Enrollment to the competition implies the whole acceptance of the current regulation.